Hotel Anthracite was proud to host veterans, their family members and local gold star families for our inaugural Veterans Breakfast. The event, which was free and open to the public, included a presentation by Camp Freedom as well as a keynote address by retired Brigadier General Wilbur E. Wolf III. The program was part of Settlers Hospitality’s annual Veterans Appreciation, which makes approximately 200 guest rooms available to veterans free of charge throughout all our properties.

The practice of honoring veterans began nearly 10 years ago at The Settlers Inn and has been carried on at sister properties Ledges Hotel and Silver Birches Resort. Now the tradition continues at Hotel Anthracite. The salute to former and current military members included a hot buffet breakfast provided by Settlers Hospitality with support from private donors. Most of the attendees also enjoyed a complimentary overnight stay at Hotel Anthracite. 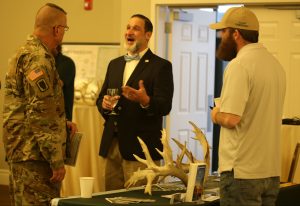 Camp Freedom helped organize the breakfast program, with Executive Director Matt Guedes offering welcoming remarks. Located in nearby Waymart, PA, the non-profit organization makes 1,800 acres of countryside accessible to disabled veterans for hunting, shooting sports, fishing, camping, hiking, biking and other year-round outdoor activities. Major General John Gronski was guest of honor and Bob and Ginny Pallo from Pocono Raceway Military Affairs received special recognition. The prior evening at The Settlers Inn, veterans were treated to complimentary wine and cheese as well as a presentation by Tom Ryan, executive director of Vetstock. The local non-profit works to improve the lives of past and present members of the U.S. military and their families. 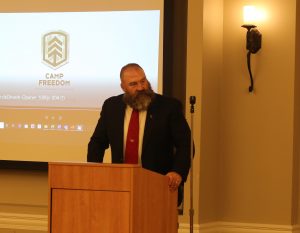 remarks recalled the origins of Veteran’s Day and reflected on the importance of America’s service members throughout its history. The brigadier general commented that never in the history of our country have the freedoms of so many depended on the sacrifices of so few. In fact, according to General Wolf, less than one percent of the population serves in any branch of the military and fewer than 10 percent of America’s current population has ever been in the armed forces. The sobering statistic was reinforced by the general’s acknowledgment that the present War on Terror is America’s longest running conflict.

We were honored to host General Wolf, who emphasized the importance of events such as the Hotel Anthracite Veterans Breakfast to salute America’s military. He offered a special thanks and recognition to Vietnam War veterans in attendance. It was a privilege for Hotel Anthracite to welcome veterans and their families for this first-ever program. We hope the event continues to grow in size and scope as a community tradition.

Hotel Anthracite hosts many community events and programs throughout the year. Check our specials for the ultimate dining and lodging packages so you can plan your next visit to Carbondale.