Pioneer Nights is an end-of-summer tradition in Carbondale. Held during the third week of August, the community comes together to celebrate its place as the first city in Lackawanna County. The four-day festival culminates on Saturday with events around town and a parade in the evening. All the activity happens just steps from Hotel Anthracite. We strolled around on Saturday to take in the sights and be part of the festivities. 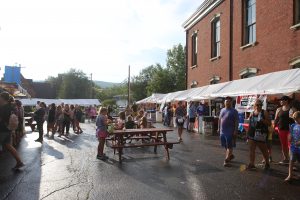 Memorial Park and the City Hall surroundings serve as the event hub. Food stands offer everything from ethnic favorites to traditional festival fare. Festival goers have the enviable task of choosing from savory items such as pierogis, pizza, chicken wings, pasta fagioli, pulled pork and wimpies. There are also an array of carnival games and children’s activities. Volunteers from the Carbondale Fire Company operate a kids’ putting game, duck derby and balloon darts. The Greater Carbondale YMCA makes a splash with a dunk tank and bounce house. Live entertainment is featured nightly. Some of the area’s most popular bands perform including Blue London, The Wannabees and Mace in Dickson. The Red Dragon Karate Fire Show and Lynette’s Twirlettes performances are always a crowd favorite. Friday is capped off with a giant fireworks display. 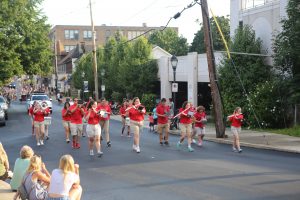 Many downtown locations host day-long events on Saturday during Pioneer Nights. Memorial Park welcomes Antiques in the Park, which features antique dealers, handmade goods and unique artwork. Carbondale Public Library holds a book and bake sale. Children of all ages dig in to a fun Scavenger Hunt, which begins at the Greater Carbondale Chamber of Commerce.

The Steamtown Heritage Explorer Train Excursion brings visitors to town from Scranton to enjoy all the offerings. Riders are greeted by S. Robert Powell, president of the Carbondale Historical Society who then offers a tour of the historical society’s museum. Trinity Episcopal Church is one of the oldest in the city. During Pioneer Nights visitors can take a guided tour of the church, which features many notable architectural elements including Tiffany stained glass windows. The Pioneer Nights Parade is a long-standing tradition in Carbondale and marks the transition from daytime festivities to nighttime celebration. Participants include marching bands, school groups, local businesses, community leaders and first responders. 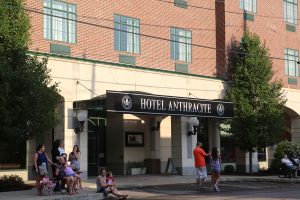 Some former residents make Pioneer Nights a homecoming. Locals take the opportunity to catch up with neighbors and friends. Whether you’re staying over or meeting up, Hotel Anthracite is the place to gather. Share memories over drinks and dinner at Kol Steakhouse. Celebrate in surroundings that honor the legacy and spirit of the Pioneer City.