Round. Square. Red. White. There are almost as many types of pizza in Northeast PA as there are tight-knit communities. Each town has its favorite style with devoted fans claiming it’s the best. On the Lackawanna County Pizza Trail, you can be the judge and taste for yourself. Developed by the Lackawanna County Convention and Visitors Bureau, the tantalizing trip features the top 63 out of 160 pizza places in the county as voted on by locals. The self-guided tour is broken down into nine geographic regions.

Download our Northeastern Pennsylvania Destination Guide before heading out. Inside you’ll find tips and information on local resources and points of interest.

Carbondale is the northern-most point on the trail, so you can begin the journey right here in our hometown. Voters selected six pizza places in and around the Carbondale area to be represented on the trail. Domenick’s Pizza and Hoagies is steps away from Hotel Anthracite while Pizza Guys is well within walking distance. Domenick’s New York style pizza has been a staple on Main Street for over 40 years. The menu at Pizza Guys covers a wide range of styles. For cheese lovers, order the Peckville Pizza or go with the traditional New York-style. Of course, there’s a variety named after the Pioneer City called, Carbondale. Kick it up a notch with an assortment of Designer Pizzas that include everything from Bacon Cheeseburger to Hot Wing and Shrimp and Garlic. Other local stops on the tour include Frank’s Place, Kay’s Pizza, Peanut Bar and Steve and Irene’s Hoagies.

Travel “down the line” as the locals say and hit the pizzerias of the Valley View region. There are seven can’t miss restaurants here including long-time favorite Andy’s Pizza. The 75-year-old family run business in Peckville has a pizza dough that’s unique to its shop. Café Colarusso in Jessup is famous for its Red Pizza baked in stone-lined ovens.

Next stop is the pizzerias of the Mid-Valley region. The Lackawanna Pizza Trail designates seven places in the area to try. Although it only opened in 2011, Armenti’s Pizzeria in Olyphant quickly gained a following. Run by a husband and wife duo, the restaurant is known for its fun pizza creations such as Penne Vodka Pizza and The Godfather Pizza. Roma Pizza recently opened a new larger location on the busy Scranton-Carbondale Highway in Dickson City. An NEPA staple since 1974, Roma serves over eight varieties of pizza.

Branch out into the Abingtons region and stop at three hot spots. Colarusso’s Café in Clarks Summit keeps customers coming back with its classic red pizza, fresh tomato and double crust pizza. Rosario’s Pizza and Ristorante always has a variety of specialty pizza along a cafeteria-like display so customers can mix and match by the slice. Located a little off the beaten path in Scott Township, Vincenzo’s may be the best kept secret to enjoy a tray of pizza by the fireplace.

Dunmore is known for its neighborhood Italian restaurants. The area may be small in size but boasts a ton of options for dining out. The town is home to nine spots on the Lackawanna County Pizza Trail. The art of pizza making is a family tradition passed down through the generations at Cali’s Don Tomaso Peatza. Traditions and old-world flavor are the trademark of Cara Mia’s Delicatessen. Owner Cara Mia Iannieli Lowe cooks with a mozzarella recipe created by her grandfather in Italy over 80 years ago. For more than 50 years Nardozzi’s Pizza has served its signature pizza using homemade sauce, a blend of cheeses and baked fresh on the hearth.

The largest city in Lackawanna County is big on pizza. There are no less than 16 spots on the Pizza Trail in Scranton. Some, like Vince the Pizza Prince, have been around for decades. Others such as Bar Pazzo are new on the scene. The rustic style Italian restaurant has made a name for itself with much of the dishes cooked in two Mugnaini wood-fired ovens. Alfredo’s gained notoriety with a mention on NBC’s “The Office.” Nearra’s Pizzeria is the only place in Northeast PA to find Detroit-style pizza. Buona Pizza has been a landmark business on Lackawanna Avenue since 1966.

Just on the outskirts of Scranton, Moosic has two stops on the Lackawanna Pizza Trail. Dino and Francesco’s is a well-known restaurant in Northeast PA and Grande Pizza and Family Restaurant has been a local favorite since 1971.

Only one place calls itself the pizza capital of the world and that’s Old Forge, PA. The town in southern Lackawanna County developed a style of pizza making all its own that’s dubbed, what else, Old Forge style. Typically, square in shape, Old Forge pizza is distinguished by a crust that’s lighter and crispier than traditional pizza. Old Forge style pizza is available in red or white with red offering a slightly sweet sauce that includes  diced onions. There are nine designated stops on the Pizza Trail in Old Forge. Some are landmarks in town, such as Revello’s. Established in 1967, the restaurant uses the same family recipes today as when it opened. Café Rinaldi got its start in the early 1900s  when Louisa Laurenzi began making lupitze, basic pizza dough with savory toppings, for coal miners. The multi-generational, family-owned restaurant continues the traditions and flavors of its ancestors. Salerno’s Café is another anchor restaurant in Old Forge, with a history that dates back more than 90 years.

As people began moving from the city centers of Lackawanna County to the countryside and suburbs, they carried their recipes to a new location. The final stop on the Pizza Trail symbolizes that journey. The North Pocono region boasts three stops worth the trip. Italian immigrant and coal miner Gaetao Ferri started Ferri’s Restaurant in 1936 in Old Forge. Today the third generation operates a namesake restaurant in Moscow. In addition to serving Old Forge style pizza, Ferri’s offers a tribute to Northeast PA’s coal mining past with artifacts, photos and even a coal mine replica. Kay’s Italian Restaurant in Covington Township is a must see for its structure as much as its food. The cornerstone of the restaurant is an early 20th century diner that was built to resemble a train car. Original features include mahogany woodwork, inlaid mosaic tiles and brass features. 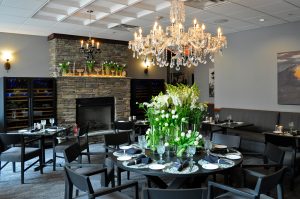 No matter what brings you to Northeast PA, some time spent on the Lackawanna County Pizza Trail is essential. Dive into each region bite by bite or plan a sampler trip of the entire route. When you stay at Hotel Anthracite, you’re within minutes of most destinations along the self-guided tour. Plus, you can top off your culinary journey with dinner at Kol Steakhouse. Hotel Anthracite’s restaurant boasts traditional steakhouse fare with a creative flare. Our modern boutique hotel honors the region’s rich history. Have an authentic heritage experience with a trip that immerses you in the culture, traditions and flavors of Northeast PA. Check out the specials and packages available and book your getaway today.