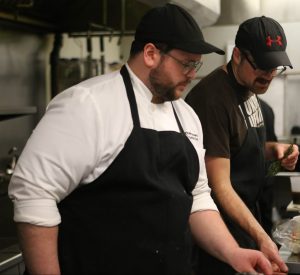 It’s not your grandfather’s steakhouse! Hotel Anthracite’s executive chef, Dustin Stevens, says Kōl Steakhouse sets itself apart by creating unique twists on classic dishes. For the past six months he’s helmed the kitchen at the Carbondale restaurant. “We use our creativity and our freedom to do delicious spins on traditional favorites, as well as push the boundaries of what you would expect from a steakhouse,” says Chef Dustin.

The Kōl menu features the traditional New York Strip, Filet Mignon and Delmonico Steak alongside the unexpected such as Jalapeno Popper Stuffed Mushrooms, Sweet Potato Poutine and General Tso’s Cauliflower Bites. Chef Dustin isn’t content to rely on one signature dish. “I couldn’t choose a favorite even if I wanted,” he explains. “It’s like choosing a favorite child.” For a chef who describes his style as, “traditional with a new age twist,” it’s no surprise he’s so at home at Kōl Steakhouse.

Dustin hails from South Sterling, PA and acquired his skills on the job. He worked alongside many talented chefs he considers mentors and says the styles, presentations and practices he learned from each one was invaluable. The simple joy he derives when someone enjoys a meal he prepares continues to stir his passion for cooking. He relishes one of the inherent perks of his profession- working with a variety of ingredients that may be too expensive to use at home on a regular basis. Cumin is his go-to ingredient in the kitchen. “I personally really love Tex Mex food, so my favorite flavor combo is cumin, chipotle, cilantro and lime. The cumin just really gives it that Tex Mex taste,” explains Chef Dustin. When he’s not cooking and gets the chance to eat out himself, he says there’s nothing like digging into a plate of chicken wings. 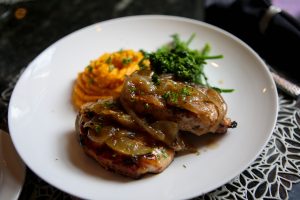 The care that is taken in every aspect of dining at Kōl is foremost on Chef Dustin’s mind. “I want my guests to leave with an overwhelming sense that the entire staff truly cared about the experience they received. From the food, to the service, to the cleanliness of the hotel, I want them to leave anticipating their next visit,” says Chef Dustin.

Make plans to visit Hotel Anthracite for a steakhouse experience for the 21st century. Check out our specials for dining and lodging packages that help you make the most of your stay.